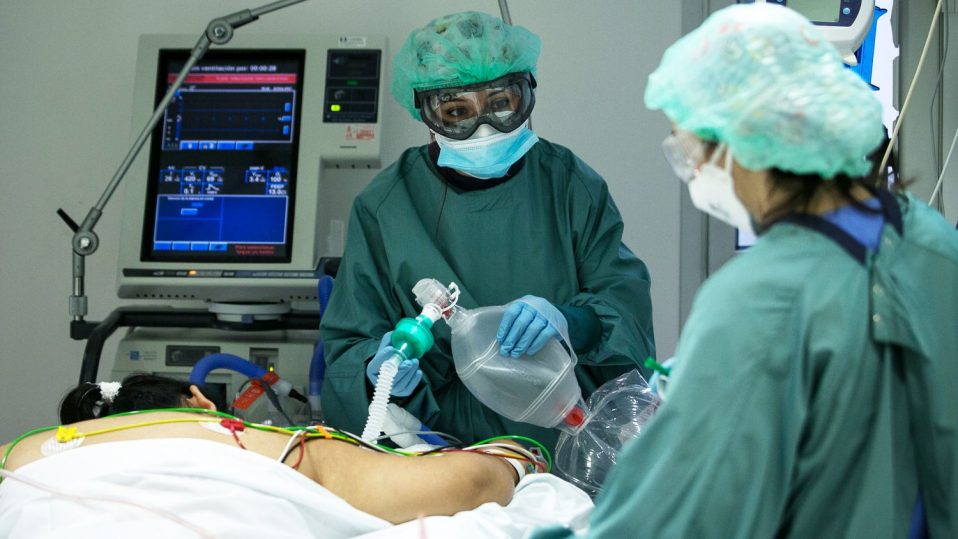 25 Jan (El Pais english).- The surge in new cases is pushing hospitals to the limit, with some regions recording more or the same number of Covid-19 admissions as in the spring of last year.

Disastrous. Difficult. Disheartening. That’s how dozens of health experts have described the coronavirus epidemiological situation in Spain to EL PAÍS. The country is reaching the peak of the third wave of the pandemic, if it is even possible to say the second ever ended.

The number of new infections likely peaked last Thursday, when 44,357 cases were reported – the highest single-day figure since the start of the pandemic. If the curve has not started to flatten since then, it will do so this week, according to experts. But with the 14-day cumulative number of cases per 100,000 inhabitants at 828, the real question is how quickly will contagions start to fall and if they will instead reach a plateau.

Adding to the uncertainty is the spread of the new, more infectious strain of the coronavirus first detected in the United Kingdom. In some areas, such as Cantabria and the northeast of the Madrid region, more than 20% of new cases are from this strain, according to calculations from leading hospitals based on patient tests, reports Oriol Güell.

Even in the most optimistic scenario, where there is a rapid fall in transmission, hospitals in Spain will still face difficult weeks ahead. Some Spanish regions last week recorded more Covid-19 admissions and higher occupancy rates than in the first wave last spring. And this pressure will only intensify, even if cases fall, as there is typically a delay between a spike in infections and hospitalizations, given it can take several days for a patient’s condition to worsen.

The enormous effort of spring 2020 has been wasted. Basic lessons were not learned”

During the second wave of the pandemic, Spain appeared to be reporting a similar number of new coronavirus infections as in the first wave. But experts explained that this was not the case: in the spring, only serious cases were tested for the coronavirus, while in autumn, testing capacity improved so that even asymptomatic cases were being detected. The third wave of the pandemic can, however, be compared to the worst moments of the epidemic in Spain. The most accurate data point to measure the severity of the pandemic is the number of hospitalizations. These figures, however, are difficult to compare, as the Health Ministry has only been reporting hospital occupancy rates – the percentage of beds occupied by Covid-19 patients out of the total – since August. This data point is now worse than it was in the second wave in nearly all of Spain’s 17 regions. And it will continue to rise between seven and 10 days after new infections reach their peak.

But how does the third wave of the pandemic compare to the second? The best way to compare the situations is by calculating the number of daily hospital admissions for Covid-19 – data that has been provided by the Carlos III Health Institute, since it began reviewing hospital cases in December. In other words, the data is retrospective. According to the institute’s figures, 27,000 people were hospitalized with Covid-19 during the worst week of the first wave. In autumn, that figure was 7,000. And according to last Friday’s data, 14,000 Covid-19 patients were admitted to hospital last week. These figures are only likely to worsen this week. During the first wave, there was a sharp spike in cases, but the rise has been slower in the third wave, and will likely take longer to fall, given that coronavirus restrictions are less strict now than they were last spring, when the Spanish government ordered a full home lockdown.

The rise in hospitalizations reflects the rise in new cases reported by the Spanish Health Ministry. But this data point has its limitations when it comes to measuring real transmission as there is often underreporting over public holidays and weekends due to staff shortages. In the first wave, the highest number of cases reported was 9,222. Thanks to seroprevalence studies carried out by the Health Ministry, it is estimated that at the time only one in 10 infections was being detected. This means that during the worst days of the first wave there were close to 100,000 new daily cases. In the third wave, more than 44,000 infections were officially reported on Thursday. If around two-thirds of all cases are now being detected, that figure is closer to 70,000.

The situation varies greatly between the regions. It is unlikely, for instance, that Madrid will record worse coronavirus figures now than it did during the first wave, when its hospitals were pushed to breaking point. But other regions that suffered less during the first wave, such as Valencia, Murcia and Andalusia, are already reporting more hospital admissions than in March or April. “We are already seeing a problem of capacity especially with diseases that aren’t Covid. Operations, non-personalized care and non-essential surgery are already being postponed,” says Ana María García, a professor of epidemiology at Valencia University.

“The enormous effort of spring 2020 has been wasted. Basic lessons were not learned,” adds Miguel Hernán, a professor of epidemiology at Harvard University. “Spain has the highest incidence rate of large Western countries, the highest occupancy rate in ICUs [intensive care units] and probably the highest excess death per capita. All indicators continue to worsen, but the measures being taken are more relaxed than in countries with a lower incidence rate that are vaccinating at a faster pace [such as the United Kingdom]. It beggars belief. There is still the possibility that we are lucky and the situation is only extremely serious instead of catastrophic, but it would be better to have a plan.”

There are several reasons why Spain is not likely to see the same number of Covid-19-related fatalities as in the first wave, when nearly 1,000 were reported each day at the peak. The pressure on hospitals is more evenly spread across the regions, making it unlikely – but not impossible – that hospitals will again be pushed to the breaking point in the cities of Madrid and Barcelona, as well as those in Castilla y León and Castilla-La Mancha. Since the first wave, doctors have also learned a lot about how to treat serious patients and survival rates in ICUs are higher. There is also more personal protective equipment; more ventilators available for ICU patients; the impact on age groups is more homogenous, with more young people infected; senior residences are better protected; and the vaccination drive has begun. These points are cause for optimism, say health experts. “There will not likely be rationing of intensive care, as happened last year [when doctors were forced to choose which patients to admit to ICUs], but it will be very complicated,” says Fernando Rodríguez Artalejo, a professor of public health at Madrid’s Autonomous University.

But there is also cause for concern: the spread of the more infectious variant of the coronavirus. José Martínez Olmos, professor of the Andalusian Public Health School, recalls that British Prime Minister Boris Johnson warned in mid-December that the epidemic was “out of control” due to the mutation. “He said that and the following day took distinct measures that should have been adopted four days earlier,” says Martínez Olmos. On December 21, the European Center for Disease Prevention and Control (ECDC) called for limits on travel and non-essential social gatherings.

The Spanish government suspended flights arriving from the United Kingdom, apart from those carrying passengers who either have Spanish nationality or are residents in Spain, until February 2. But few other measures were taken to control contagions. Every region, with the exception of Valencia, opened their borders over Christmas to allow people to see relatives and close friends – despite warnings from health experts that it would lead to a third wave of infections. These warnings were made even before the news emerged about the new strain of the virus.

Anna Llupià, a specialist in preventive medicine and public health at Clínic hospital in Barcelona, believes – like other experts consulted by EL PAÍS – that the new strain is not being taken seriously enough. “Without a doubt, it has a stronger aerosol component [in air transmission]. Internationally, it is talked of as a pandemic within a pandemic and the measures we have now are definitely not enough,” she says. In Germany, however, the issue is being taken seriously. Although the country has a much lower incidence rate than Spain – 319 compared to 828 cases per 100,000 inhabitants – all public life has been practically locked down for the past two months. In response to the new variant, German Chancellor Angela Merkel said that immediate action was needed. In addition to the current measures, it is now mandatory in Germany to wear a so-called “medical mask,” such as the FFP2, in stores and public transportation, instead of a cloth mask.

Most epidemiologists who spoke to EL PAÍS say the main problem is that Spain has taken a reactive – not proactive – approach to the pandemic. Since the beginning of December, health experts have been recommending strict and short lockdowns to cut transmission and prevent the situation that Spain is now facing. “I don’t understand who has benefited from these months of agony and intermittent restrictions, instead of shorter and stricter periods [of confinement],” says Llupià.

Experts agree that a different approach from the second wave is needed to contain the spread of the coronavirus. “The triumphalism of a few months ago was surprising,” says Hernán. “While areas with greater incidence continued to spread the virus across the country, and increase the risk of new mutations due to its wide spread, the incidence rate never dropped low enough to empty out hospitals to safe levels. We were playing with fire by maintaining the high occupancy rate in ICUs throughout autumn and we have been burned. Now the pandemic is terrible for anyone who needs intensive care, be it for Covid-19, a heart attack or a traffic accident.”

Indeed a wave of the pandemic was considered over, even when most regions were at “high risk,” according to the Health Ministry’s own coronavirus alert system. Madrid was praised for cutting transmission without closing down bars and restaurants, when the virus was still spreading throughout the region. Experts say these mistakes must not be repeated. “We know that the virus responds to the measures that we take: if they are tough, the incidence rate and transmission fall,” says epidemiologist Javier del Águila. “We are going to have to do what we know and accept that over Christmas [when restrictions were relaxed to allow family gatherings] we were wrong.”

Pere Godoy, the president of the Spanish Epidemiology Society, believes Spain has an opportunity to take better control of the pandemic. “We have to prioritize detecting the new variant of the virus. If this is not done, controlling it later is going to be much more complicated,” he says. “It is an opportunity to establish an effective monitoring system that really controls these new variants. And we must not be satisfied with reducing transmission to levels of the second wave, because if we do, we could enter a fourth wave that is even worse.”