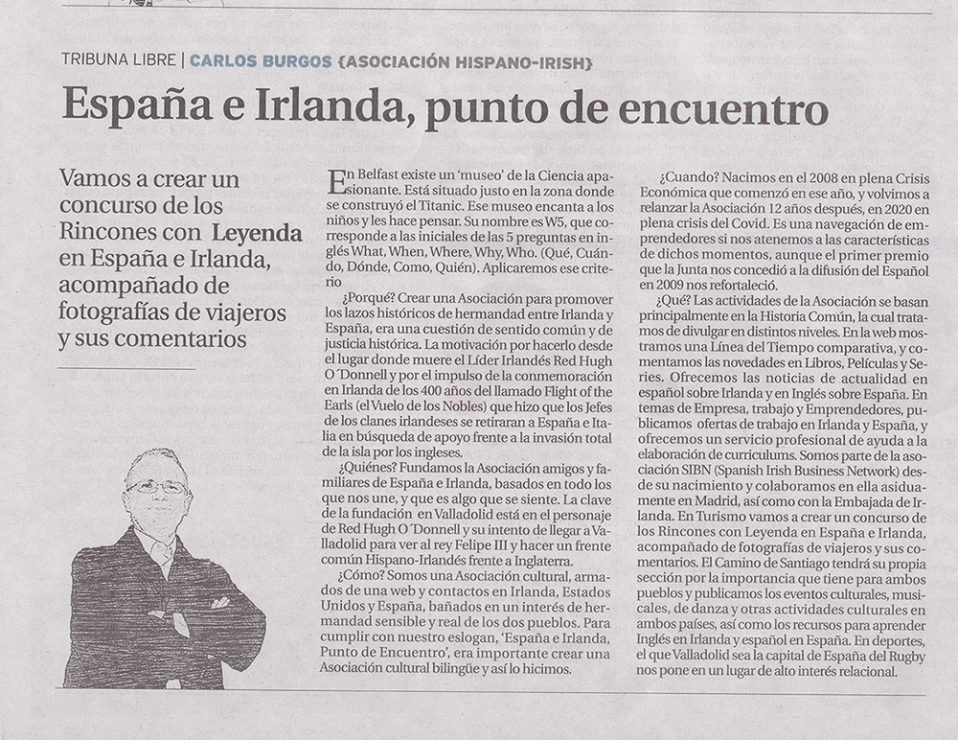 In Belfast there is an exciting Science “museum”. It is located right in the area where the Titanic was built. This museum enchants children and makes them think. Its name is W5, which corresponds to the initials of the 5 questions in English: What?, When?, Where?, Why?, Who?. We will apply that criterion to this article.
Why? Creating an Association to promote the historic ties of brotherhood between Ireland and Spain was a matter of common sense and historical justice. The motivation for doing it began in the place where the Irish Leader Red Hugh O’Donnell died and was provoked by the commemoration in Ireland of the 400 years of the so-called Flight of the Earls that made the Chieftains of the Irish clans withdraw themselves to Spain and Italy in search of support against the total invasion of the island by the English.
Who? We founded the Association with friends and relatives from Spain and Ireland, inspired by everything that unites us. The reason for the founding of the Association in Valladolid City is in the character of Red Hugh O’Donnell and his attempt to reach Valladolid to meet with King Felipe III and form a common Hispano-Irish front against England.
How? We are a cultural Association, with a website and contacts in Ireland, the States and Spain, bathed in a genuine interest of sensitivity and real brotherhood of the two nations. To fulfil our slogan, “Spain and Ireland, Meeting Point”, it was important to create a bilingual cultural Association and we did so.
When? We were born in 2008 in the midst of the Economic Recession that began in that year, and we relaunched the Association 12 years later, in 2020, in the midst of the Covid crisis. Those years were extremely testing for us though we were strenghthened by being awarded first prize by the Regional Government of Castile and Leon for the propagation of the Spanish language in 2009.

What? The activities of the Association Hispano-Irish are mainly based on the common history of the two countries which we try to propagate at different levels. On the website we show a comparative Timeline, and we comment on related news, books, movies and series.
We offer current news in Spanish about Ireland and in English about Spain.
In matters of business, jobs and entrepreneurs, we publish job offers in Ireland and Spain, and we offer a professional service to help with the preparation of curriculum vitae. We have been part of the SIBN (Spanish Irish Business Network) association since its formation and we collaborate with it assiduously in Madrid, as well as with the Embassy of Ireland.
In Tourism we are going to create a travel knowledge quiz of the special Corners related to legends in Spain and Ireland, accompanied by photographs of travellers and their comments. The Camino de Santiago will have its own section due to the importance it has for both nations and we publish musical, dance and other cultural events in both countries, as well as linguistic resources to learn English in Ireland and Spanish in Spain.
In sports, the fact that Valladolid is the Spanish capital of Rugby puts us in a place of high mutual interest.

Your ticket for the: Ireland & Spain, Meeting Point in Valladolid