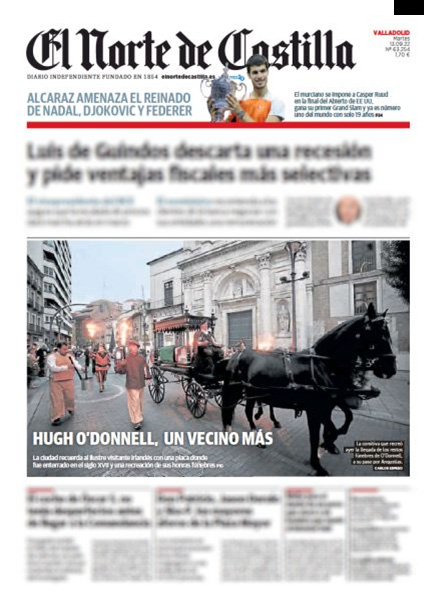 The search for his remains concluded with the discovery of  eighteen bodies from previous centuries and a plaque now recalls the place where he was buried next to Columbus.

“Under this ground of the convent of San Francisco, heart of the life and spirituality of the people of Valladolid and mother house of San Pedro Regalado, are the remains of the Chapel of the Wonders, where Cristopher Columbus (1451-1506) and the Irish hero Red Hugh O’Donnell (1572-1602)”, reads the huge plaque (with the legend in Spanish, English and Irish) that from this Monday remembers on the facade of number 10 of Constitution street (in the Santander bank office ) the exact point where the funerary chapel was located two years ago, in which the navigator (his remains would later be transferred) and the Irish nobleman were buried.

The archaeologists, regarding the search for the body of Red Hugh, definitively rule out its possible location after analyzing the eighteen bodies exhumed during the excavations two years ago, when the entrance to the chapel of the disappeared convent of San Francisco was found (1260-1835) and three levels of burials long before the death of the Irish Princeps. Studies place these bodies between the 13th and 14th centuries. Most of them, moreover, were buried with a simple shroud and hardly any signs have been recovered in the form of clothes or objects that allow their possible identification beyond a rosary of beads belonging to a woman, whose image has now been recreated by the researcher Juan Carlos Urueña -in the photograph-, and some coins of Alfonso XI (1311-1350).

«What was above it most likely disappeared during the demolition of the convent in the 19th century and the truth is that the foundations of the current building (raised on the site of the convent cloister and this and other chapels) prevent the search from continuing beyond of what has already been excavated”, summarized the archaeologist Jesús Misiego, who carried out the survey between May 18 and June 8, 2020, during a talk held this Monday to present the results of that investigation, which historians began Óscar Burón and Juan Carlos Urueña to locate, and they did so with almost millimeter precision, the location of the Las Maravillas chapel within a convent that occupied three hectares between the Main Square and Duque de la Victoria street, Santiago and Constitution streets.

What is clear, and this is reflected in the historical documentation, is that Christopher Columbus and Red Hugh O’Donnell were buried in this chapel. The latter with royal honors. The Irish hero died in Simancas on September 10, 1602 when he was waiting to be received by Felipe III to ask for his help in the war against the English. And today, 420 years after that anniversary, Valladolid has paid tribute to Red Hugh O’Donnell with a series of talks and conferences, the inauguration of a plaque in his memory on Constitución street and a recreation of his notorious funeral, which began of the Royal Palace to flow under the aforementioned plaque, where he was buried at the time. A laurel wreath was placed there in his memory and in recognition of his figure.

Valladolid, according to the mayor, Óscar Puente, wants to strengthen ties and build bridges with Ireland. A glove that has been collected by the ambassador of said country in Spain, Frank Smyth, who thanked the gesture of valuing the figure of Red Hugh O’Donnell and conveyed the “enormous gratitude of Ireland to the people of Valladolid” for this fact and for to welcome his hero in his day at a “complicated moment in our history”.

The inauguration of the plaque was attended by two descendants of the Irish navigator and hero, Christopher Columbus and Hugo O’Donnell (the two have the same name as their ancestors), who showed their gratitude for the memory of their ancestors and the enhancement of the where they were buried.

See all the News in English
Return to the Home page Hispano-Irish.com

Your ticket for the: Valladolid pays tribute to Red Hugh O’Donnell and builds bridges with Ireland (El Norte de Castilla)