TO SPAIN AND ROMA 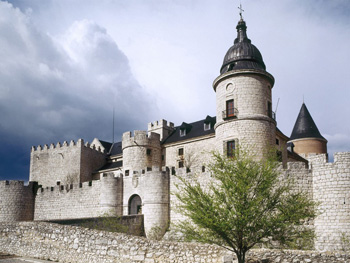 Many appeals had been made to King Phillip of Spain for help and it finally arrived in the Autumn of 1601. O´Donnell was still harassing the English in Donegal when he received the news of their arrival on the southern coast. Leader of the expedition was Don Juan del Aquila and he put in at Kinsale on the river Bandon. The small garrison immediately retreated to Cork and the Spaniards took possession of the town unopposed. Del Aquila unloaded his provisions and armaments and then ordered his fleet to return to Spain. Word soon reached both the Lord Justice and the President of the two Munsters, and they (Mountjoy and Carew) immediately marched on Kinsale. They besieged the town and a fleet also arrived to blockade Kinsale from the sea. Fighting continued throughout the late autumn and early winter with heavy casualties on both sides, and the Spaniards had to evacuate the outlying forts at Rincorran and Castle Park.

For O´Neill and O´Donnell the news was distressing, yet they resolved to go to the assistance of the beleaguered Spaniards. It had been most unfortunate from the Irish point of view that the expedition had arrived so far south where the Irish cause was weak instead of in Ulster where the Irish cause was strong. The same fleet arriving in the North-West would have been immediately greeted in friendly territory and, with the help of the Ulster Earls, a different result of ‘The Nine Years War´ would obviously have been recorded. In addition, both chieftains had many enemies … the old policy of “divide and conquer” had been adroitly applied by the English and there was opposition to them even within their own Irish clans. The policy was so successful that there was even an O´Neill v an O´Neill, an O´Donnell v an O´Donnell and a McMahon v a McMahon, to mention just three. Leaving Ulster unguarded was dangerous.

Nevertheless, the dye was cast, and O´Donnell was the first to set out with his forces, leaving Ballymote at the beginning of winter. He was accompanied by Brian O´Rourke, the sons of John Burke, McDermott of Moylurg, O´Connor Roe, O´Kelly, McMaurice of Kerry, the Knight of Glin, McMahon and McCarthy. Marching through Roscommon and Galway they crossed the Shannon and reached Slieve Bloom. Here they stopped to await O´Neill, but the English were informed and Carew, with 4,000 men, marched to meet him. O´Donnell, however, evaded the attack by crossing the frozen passes of the Slieve Phelim mountains in a series of ‘forced marches,´ later described by Carew as “the greatest march that had ever been heard of” towards Limerick and then south to Kerry where McMaurice re-took some of his former castles in north Kerry. They then headed for Kinsale.

O´Neill left Tyrone at Halloween, crossed the Boyne and the Suir and headed into east Munster. However, that three hundred miles trek the length of Ireland, during one of the severest winters in living memory, was hardly the best preparation for battle. Accompanied by Thomas Roe, the son of the Earl of Desmond, he eventually met up with O´Donnell´s men and, despite their weariness, the entire Irish force was in high spirits.

They immediately besieged the English, who now had a force of 12,000 men, not permitting any food or provisions to be admitted through their lines. It remained this way for several weeks and the English were now in dire straits, but so too were the Spaniards on the inside. A message came from del Aquila requesting them to attack on a certain night and that he would attack from the inside on the same night. O´Neill advised strongly against such action, but O´Donnell felt sorry for the suffering Spaniards. Eventually, against O´Neill´s better judgement, it was decided to attack. O´Neill, the the Kinel-Owen (mid-Ulster), and the men of Oriel, formed the first ballalion; O´Donnell, with the Kinel-Connell (NW Ulster) and their Connacht allies, formed the second battalion and the men of Munster, Leinster and Meath formed the third.

Unfortunately, during the pitch darkness of the mid-winter night, O´Donnell´s men lost their way. In addition, Mountjoy had been informed of the impending attack and was fully prepared. By the light of the morning, the Irish were taken completely by surprise and O´Neill´s battalion was routed. A similar rate awaited O´Donnell and the third battalion and the great opportunity to win a magnificent victory was turned into utter defeat.

The Irish forces retreated in disarray to Inishannon, near Bandon, where it was resolved that O´Neill and Rory O´Donnell should return with their depleted forces to Ulster but that Red Hugh should travel to Spain to seek further assistance. O´Sullivan Beare was left in charge of the remaining Munster insurgents. This defeat was incurred on the 24th December 1601, according to the English calendar, but on the 3rd January 1602, according to the Irish calendar.

On the 6th January O´Donnell, accompanied by Redmond Burke and some others, set sail from Castlehaven and arrived in Corunna on the 14th of that same month. He then met King Phillip in Castile and pleaded his case. Phillip delayed too long, however, thus angering O´Donnell who returned to him the following August, but on the way he was taken suddenly ill and died on 10th September as result of poison administered to him be an English spy named Blake who had pretended to be his friend. The great Tirconnaill chieftain was buried with much ceremony in the monastery of St. Francis at Valladolid.

Following the Kinsale disaster, the Spaniards were allowed to return home, but a bitter fate awaited the defeated Irish. The insurgent O´Brien´s were driven back into Clare where they were hanged in pairs, face to face, from the nearest trees. O´Sullivan Beare´s castle was captured and many of his followers executed. With the remnants of his force he retreated northwards. Pursued, attacked and constantly harassed, many of his friends deserted him, but he eventually reached the Shannon which was successfully crossed. Betrayed by many of his former allies, he continued northwards until as the Four Masters recorded “They afterwards proceeded, in the midst of spies and betrayers, along the roads until they arrived in Ulster.” They eventually reached the safety of O´Rourke´s castle.

Meanwhile, O´Neill and the other chieftains had also returned to their own territories by their own devices but were constantly harassed and attacked by enemies on all sides and even by former allies who now turned against them. Seeing their leaders defeated, many Irish had gone over to the English side. Rory O´Donnell then reached Ballymote but later lost his castle in Ballyshannon. Despite such reverses, Rory, assisted by O´Connor Sligo, still recorded a fine victory over the enemy at Ballaghboy among the Curlew Hills in the Autumn of 1602.

O´Neill held out courageously for two more years after Kinsale but, hunted like a fox, he now found himself surrounded by Mountjoy´s forces who had built a ring of forts to hem in the Ulster chieftain. The news of the death of Red Hugh then reached the North and this had a devastating effect, especially on O´Neill, who believed strongly that O´Donnell might yet return with another Spanish expedition.

When Mountjoy offered Rory O´Donnell peace terms he gladly accepted. O´Neill, seeing that there was now no point in continuing with the struggle, also agreed to peace terms with Mountjoy and the two parties met at Mellifont in March 1603, when a Treaty was signed, officially bringing to an end ‘The Nine Years War´. The defeat at Kinsale was now complete. The War had dragged on for those two further years but, to all intents and purposes, it had ended at Kinsale, thus creating the greatest turning point in Irish history. The age of the Gaelic chieftains had ended in that defeat.

Unknown to O´Neill when he signed The Treaty of Mellifont, Queen Elizabeth was already dead, but Mountjoy had kept this a secret from him … had he known he probably would never have yielded as her successor, James, was more sympathetic and had previously shown himself friendly. According to the Treaty of Mellifont, O´Neill retained the title Earl of Tyrone, but from now on he found himself surrounded by spies who, supported strongly by the new Lord Deputy Chichester, reported on his every move. He knew that his life was in dire peril and realised that remaining in Ireland was no longer feasible.

Eventually, on Friday 14th September 1607, Hugh O´Neill, Rory O´Donnell, their families and friends, numbering almost one hundred, sailed out of Rathmullen harbour in Lough Swilley on board a ship flying the French flag and left Ireland for ever. With them sailed the last hope of Gaelic Ireland.

On October 4th they arrived in France and then travelled over-land to Rome, honoured in every city and court as they went, and finally reached the Holy City in May 1608. The ‘Great Earl´ would live for another eight years, dying on 20th July 1616. He was buried with great ceremony in San Pietro beside his son. A fine double slab still marks the spot where, beneath the floor, this great Irish prince lies to await the Resurrection Day.

The disaster of Kinsale changed the entire course of Irish history for all time, as, with the ‘Flight of the Earls´ Gaelic Ireland was dead. No wonder the Irish who remained loudly bemoaned the departure of O´Neill, O´Donnell and the other Ulster chieftains. The ‘Four Masters wrote of their leaving:
“This was a distinguished crew for one ship; for it is indeed certain that the sea had not supported, and the winds had not wafted from Ireland, in modern times, a party of one ship who would have been more illustrious or noble, in point or genealogy, or more renowned for deeds, valour, prowess, or high achievements, than they, if God had permitted them to remain in their patrimonies until their children should have reached the age of manhood. Woe to the heart that meditated, woe to the mind that conceived, woe to the council that decided on, the project of their setting out on this voyage, without knowing whether they should ever return to their native principalities or patrimonies to the end of the world.”

Your ticket for the: TO SPAIN AND ROMA

TO SPAIN AND ROMA