THE FLIGHT OF THE EARLS 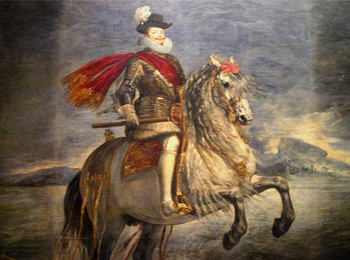 The trip and death of Red Hugh in Valladolid (Spain)

Red Hugh O´Donnell and his colleague Hugh O´Neill believed they could never drive the British out of Ireland without help from abroad. They sought this help from England´s enemy, King Philip III of Spain, who was quick to see the advantages of helping the Irish. A united Ireland would give him an excellent base from which to invade England. He prepared and dispatched an expeditionary force, but the decision to land at Kinsale was the height of stupidity, caused in fact by the interference of the Archbishop of Dublin.

Had the Spanish continued on and landed somewhere near Donegal, the united force of two armies, Irish and Spanish, would have been strong enough to defeat the English. Needless to say, when the Spaniards arrived at Kinsale they were surrounded by British, while their Irish allies were still in Donegal. However, O´Neill and O´Donnell could not leave the Spanish without help so, in the depth of winter, they marched their armies the 250 miles to Kinsale.

O´Donnell´s march is now reckoned to be one of the greatest marches in history. Indeed, the British commander Carew described it as “The greatest march that has ever been heard of”.

At Kinsale, the Irish surrounded the British and here again another huge blunder was made. The English could have been starved into surrender in a few weeks had the Irish waited. Instead, they decided to attack. The plan to attack was betrayed: the English were waiting. In the skirmish that followed, the Irish lost 1000 men and the English, only a few.

Now, the great question: Why did the Irish not regroup their forces and continue the siege?

To this, there is no satisfactory answer. Instead, they marched home to Donegal, their morale broken.

Mountjoy had his victory and shortly after, Don Juan del Águila surrendered the town. The Irish decided to send Red Hugh to Spain for further help, and he sailed from Castlehaven on 6 January 1602. He was received by King Philip with great honour and promised another force, but he fell suddenly ill at Simancas and died there on 10 September 1602.

In a letter from Carew to Mountjoy, it seems clear that he was poisoned by one James Blake of Galway, with the cognisance of Carew (if not at his instigation). His body was buried by command of King Philip, with royal honours, in the church of the Franciscan monastery at Valladolid, but no trace of the church now remains.

Your ticket for the: THE FLIGHT OF THE EARLS

THE FLIGHT OF THE EARLS