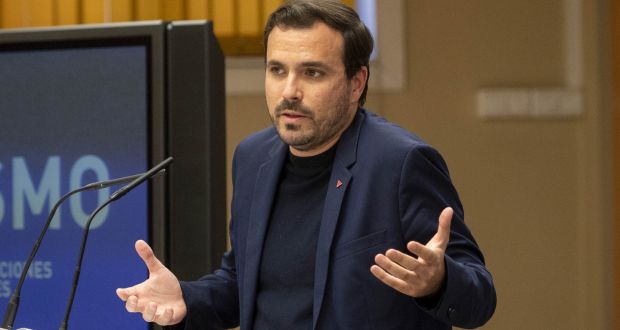 Madrid, 07 Jan (The Irish Times).- Government distances itself from ‘anti-meat’ comments by minister for consumer affairs.

The Spanish government is facing a fierce backlash and division within its own ranks after a minister warned of the possible dangers of large-scale intensive farming.

Alberto Garzón, minister for consumer affairs in the left-wing coalition government, told the Guardian that “what isn’t at all sustainable is these so-called megafarms”.

He added: “They find a village in a depopulated bit of Spain and put in 4,000 or 5,000 or 10,000 head of cattle. They pollute the soil, they pollute the water and then they export this poor-quality meat from these ill-treated animals.”

He contrasted this with more traditional, extensive farming, which he said is sustainable.

The leader of the main opposition Popular Party (PP), Pablo Casado, described the comments as an “attack on the farmers and image of our country”.

“It is not acceptable that the government should tell the foreign press that Spain exports meat of poor quality from mistreated animals,” he added.

The Asaja association of young farmers said Mr Garzón’s words were “inadmissible” and demanded his resignation.

Mr Garzón is the leader of the communist-led United Left (IU), which is a junior partner in the government of Socialist Pedro Sánchez. Last year he also triggered controversy by calling on Spaniards to eat less meat.

The debate over macro-farms has intensified recently. While their advocates see them as an efficient way of producing livestock and reviving depopulated rural areas, critics warn they come with a high cost for the environment and the animals being reared.

Greenpeace has described one such farm in the northern region of Navarre as being guilty of “ecocide”.

Santiago Abascal, leader of the far-right Vox party, also attacked Mr Garzón, tweeting a news story about how meat was served at the left-wing politician’s wedding and adding the comment: “Steaks for them. Worms for the rest.”

But probably the most worrying criticism has been from the government’s own ranks. Government spokeswoman Isabel Rodríguez said that Mr Garzón had been expressing a personal view, not that of the administration.

Meanwhile, Javier Lambán, the Socialist president of the northeastern Aragon region, joined calls for the minister’s immediate resignation, accusing him of “a direct attack on an important area of the Aragonese economy, which tries to be competitive and sustainable”.

However, Mr Garzón responded to the storm by doubling down on his comments, which he translated into Spanish and posted online, and insisting he was speaking on behalf of the government. He also claimed that the meat industry had twisted his words.

Jaume Asens, spokesman for the Unidas Podemos electoral platform of which Mr Garzón’s IU is a part, accused the Socialist coalition partners of “very serious disloyalty” on this issue, claiming that they had “thrown a meat chop in our face”.

Your ticket for the: Spanish minister triggers farmer fury with criticism of megafarms (The Irish Times)