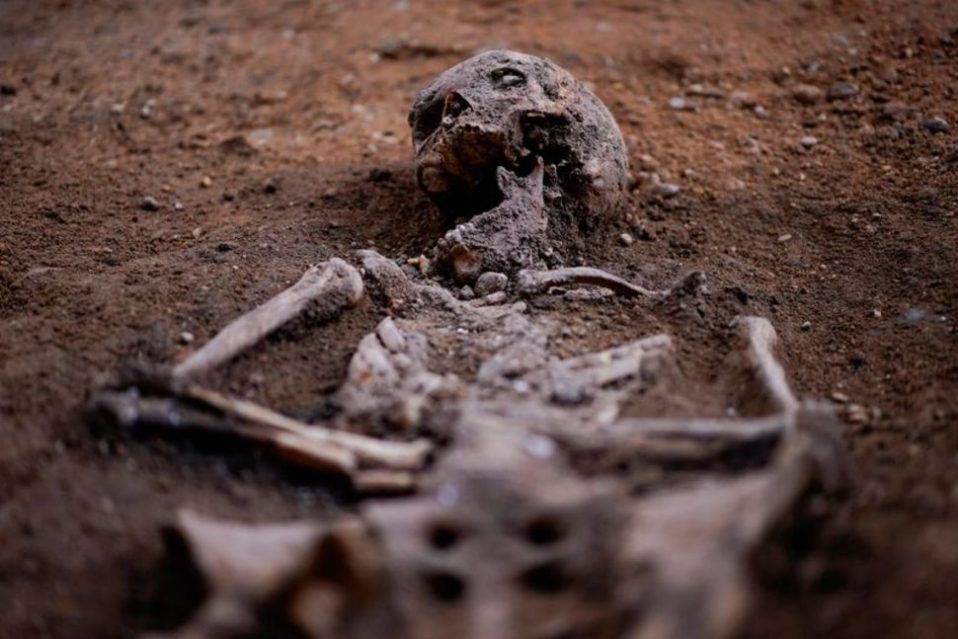 A view shows human remains found in an archeological dig, during the search for Irish nobleman Hugh O’Donnell in Valladolid, Spain

With some Spanish support, Red Hugh O’Donnell waged war against the English for nine years before his rebels suffered a defeat at the 1602 Battle of Kinsale.

He escaped to Spain, hoping to secure King Philip III’s backing for a renewed assault. But Philip was uninterested and O’Donnell died shortly before his 30th birthday near Valladolid, the site of the Spanish court at the time.

But the location of the chapel that holds his remains, and where explorer Christopher Columbus was originally buried, was a mystery until now.

Last year, a retired Irish army officer passed through Valladolid while walking the Camino de Santiago pilgrimage route and started enquiring, according to Carlos Burgos, president of the Hispano-Irish association.

“He spoke to city officials. They realized he (O’Donnell) was buried here where we are, but they didn’t know the exact site, and that was the start of the story,” he said.

So far the dig has unearthed several skeletons, though none has been confirmed as O’Donnell.

His body should be identifiable due to a lack of big toes, which he lost to frostbite during a daring winter escape from Dublin Castle, where he was imprisoned by the English.

“He’s a very dashing figure. He had a dramatic life and died young,” said Hiram Morgan, a historian at University College Cork, who believes O’Donnell’s native Donegal would likely want his remains repatriated.

“We’re in touch with the Ministry of Culture in Ireland and that’s a decision we will take together,” Valladolid’s Mayor Oscar Puente said.

Your ticket for the: Spanish Dig Unearths Human Remains in Hunt for Irish Rebel Lord (US NEWS)