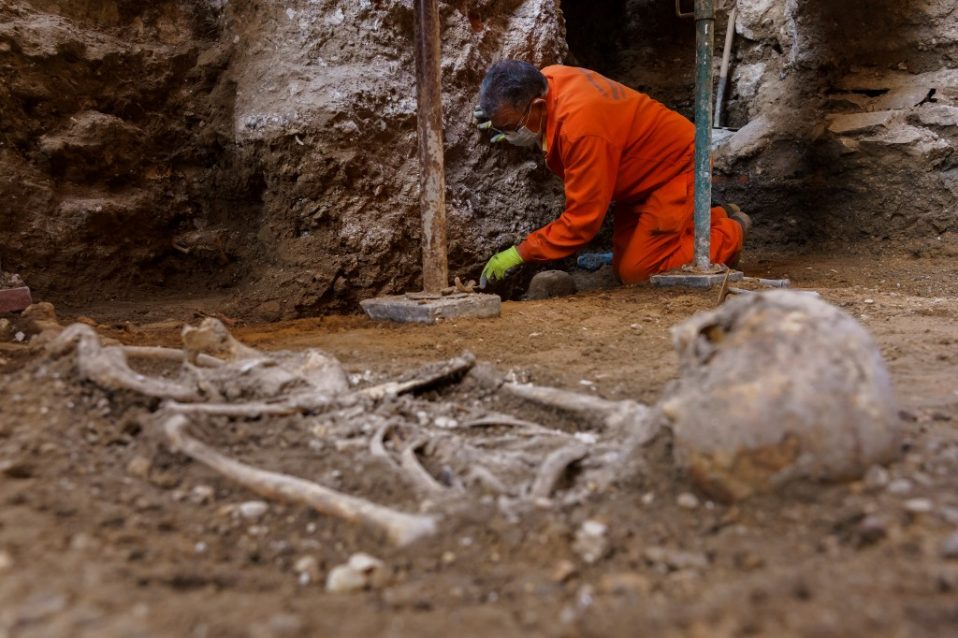 An archaeologist works in an excavation carried out by the Hispano-Irish Association in a ruined chapel in Valladolid. Photos: AFP
Forensic experts will begin testing 15 skeletons uncovered at an ancient Spanish chapel this week to see if any belong to 16th-century Irish rebel chief Red Hugh O’Donnell.

The discovery of the chapel in the northwestern town of Valladolid where O’Donnell was buried with full honours in 1602 has sparked a wave of interest among historians in Spain, Ireland and beyond.

Known as Red Hugh, the young Irishman led a rebellion that nearly ousted Elizabeth I’s English troops from Ireland, sparking a nine-year war which the rebels ultimately lost, despite help from the Spanish crown.

Just 29 at the time, O’Donnell quickly sailed to Spain to seek further support for their cause but died en route to Valladolid, the capital at the time.

He was buried in St Francis’ monastery in the prestigious Chapel of Wonders.

But for centuries, the location of the chapel — where Christopher Columbus was initially buried 100 years earlier before being moved to Seville — has remained a mystery, until archaeologists began excavating a site in the town centre in mid-May.

“It’s been confirmed that this is the chapel where Christopher Columbus and Red Hugh were buried,” said Carlos Burgos, head of the Hispano-Irish association and spokesman for the dig.

“What hasn’t been confirmed is whether any of the 15 bodies that have been found are Red Hugh O’Donnell,” he told AFP.

“There is one body which is bigger and stronger than the rest and seems to be a foreigner because it’s taller than normal and may have been a fighter.”

Although O’Donnell’s remains might have quickly been identified by the fact he lost both big toes to frostbite during a winter escape from prison in Dublin Castle, Burgos said most of the corpses did not have feet.

“There was only one with the feet intact, and that had its big toes,” he told AFP, saying the experts would run DNA testing.

To date, only around half of the chapel has been excavated — around 50 square metres — with another 40 square metres extending underneath the nearby Santander bank.

Burgos said talks were under way with the bank to secure access to the rest of the site. Ana Redondo, who is responsible for culture and tourism in Valladolid, described the chapel as “an emblematic place”, writing on Twitter at the weekend that it would become “a place of pilgrimage and an important place for the history of Ireland”.

If the chapel was confirmed as O’Donnell’s last resting place, it would be “very important” for both Spain and Ireland, Burgos said.

For Ireland, he was “a very important leader” and for Spain it would reinforce its historic alliance with the Irish people.

“Many Irish come to Valladolid asking about Red Hugh and until now, there’s been nothing except for a plaque that was put up a few years ago,” he said.

“It’s important that we try and create a respectful and visible memorial for those who want to know more about his history.”

Your ticket for the: Could 400-year-old mystery of Irish rebel chief lie in Spanish chapel? (THE LOCAL SPAIN))