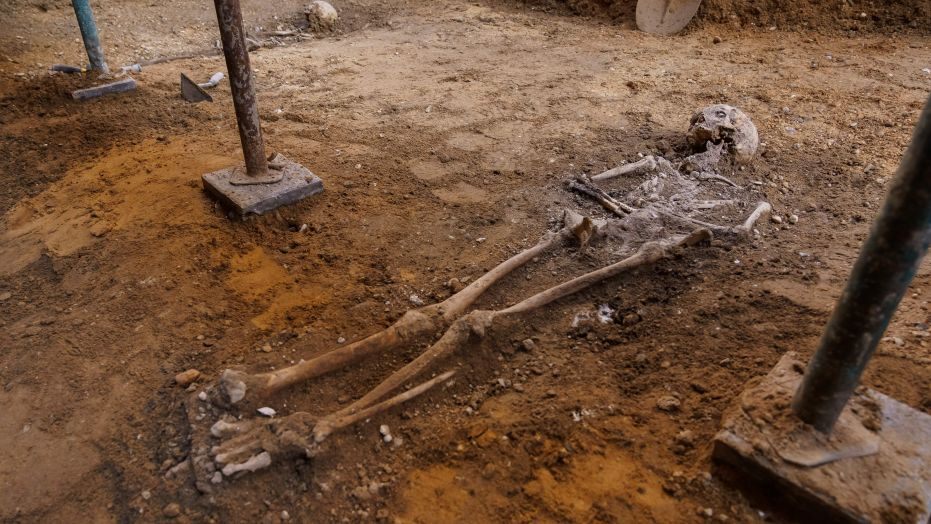 Archaeologists in Spain are searching for the bones of Red Hugh O’Donnell, a 16th-century Irish chieftain who fought English rule in Ireland and died in exile.

Born into a noble family, Red Hugh O’Donnell is known as ‘Red Hugh’ as a result of his Irish family name “Ruadh O’Domnhaill” – “Ruadh” is the Irish word for red.

A rebel leader, O’Donnell fought in the Nine Years War against the English in Ireland, which began in 1593. In 1601 after English forces defeated O’Donnell and allied Spanish troops in the battle of Kinsale, he left Ireland, according to the Ask about Ireland website. The nobleman traveled to Spain to request further help from King Philip III, but, nine months later, he was struck down by illness and died, the website explains. He was 30 years of age.

O’Donnell was in Valladolid, then the capital of Spain, when he died in 1602.

Picture shows human skeletons found in an archaeological excavation carried out by the Hispano-Irish Association in a ruined chapel in Valladolid, that expects to identify the remains of the Irish rebel lord Red Hugh O’Donnell, on May 28, 2020. (Photo by CESAR MANSO/AFP via Getty Images)

An excavation is now underway in Valladolid to find the remains of O’Donnell. The Irish Times reports that he was buried with much pomp and circumstance in the Chapel of Wonders, which was part of a Franciscan monastery in the city. In 1836, the monastery was leveled, it reports.

The chapel was also once the burial place of Christopher Columbus.

Archaeologists have already uncovered remains during their excavation in a Valladolid city street. A vital clue in identifying the rebel leader is that his skeleton will be missing the big toe on each foot, according to the BBC. O’Donnell lost the toes to frostbite while escaping English forces during the winter of 1591, the Irish Times reports.

An archaeologist works in an excavation carried out by the Hispano-Irish Association in a ruined chapel in Valladolid – May 28, 2020. (Photo by CESAR MANSO/AFP via Getty Images)

“In the chapel of Wonders, in the exact place where Red Hugh O’Donnell is believed to have been buried as well as Christopher Columbus, some remains and two coffins have appeared,” tweeted Valladolid Mayor Oscar Puente on May 26.

The BBC reports that 15 sets of unidentified human remains have been found at the site. However, only one skeleton’s feet were discovered intact, according to the BBC.

Carlos Burgos, a spokesman for the Hispano-Irish Association, which is conducting the excavation with the city of Valladolid, told Fox News that the 15 skeletons were found in an area that was once the entrance to the chapel.

“Now, we have to do some scientific analysis of all the remains,” he said. “We have to have time to analyze properly.”

Another challenge that the archaeologists face is that most of the chapel is now beneath a building. While researchers found the 15 skeletons by excavating beneath the street, there may be many more within the rest of the chapel.

Archaeologists are looking into the possibility of excavating beneath the building, although Burgos acknowledges that seeking Red Hugh’s remains in that area is easier said than done.

“A good thing would be if one of the [15] skeletons belongs to Red Hugh,” he explained.

Your ticket for the: The hunt for Red Hugh: Archaeologists in Spain search for 16th-century Irish chieftain’s bones (FOX NEWS)