Brexit: Simon Coveney says no border checks on January 1…even if no UK-EU deal 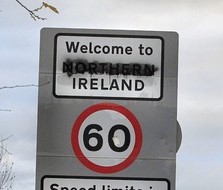 John Manley. IrishNews 18-Nov-2020. THERE will be no checks at the border on January 1 whether or not the EU and British government reach agreement

THERE will be no checks at the border on January 1 whether or not the EU and British government reach agreement on their future relationship, the Republic’s minister for foreign affairs has said.

Last night as EU negotiators warned the UK that time to strike a deal was running out, Simon Coveney told The Irish News that regardless of the outcome there will be no new infrastructure at crossing points.

In just over six weeks the 12-month post-Brexit transition period that sees the UK continue to follow EU regulations will expire. As talks on a future trading relationship between the EU and Britain resumed yesterday, Mr Coveney gave assurances that if no agreement with Britain is reached, the EU will not impose checks on the border.

Mr Coveney said he is hopeful the controversial British government bill that could break international law will become irrelevant if EU and UK leaders can strike a deal over the coming days.

At the beginning of what the foreign affairs minister described as a “crunch week”, he said the UK Internal Market Bill will become “less of an issue for the British government” if agreement on its future relationship with Brussels can be secured.

Mr Coveney said as a “statement of fact” that if MPs reinstall the elements of the proposed legislation that the House of Lords removed last week, the EU will not ratify the future relationship deal, even if the two sides reach agreement.

Peers voted by 433 to 165 – the largest majority in a vote of its kind for decades – to remove Part 5 from the Internal Market Bill.

The clauses seek to quash parts of the Northern Ireland protocol, an element of the Withdrawal Agreement replacing the backstop, which the British government signed with the EU in October last year.

Talks on a future trading relationship between the EU and Britain resumed yesterday as the clock continues to tick until the end of the transition period.

In just over six weeks’ time on January 1, the 12-month period that saw the UK continue to follow the EU’s regulations is due to expire.

Both sides have identified fisheries as a particular area of contention in the negotiations and one that could potentially derail the entire process.

Mr Coveney said in the event of no deal and the UK’s failure to implement the Northern Ireland protocol, the EU would launch legal proceedings against the British government for breaching an international treaty that “both sides signed up to”.

“The British government has a legal obligation to implement the protocol that resolves that (border checks) problem,” he said.

“What will happen of course if the protocol isn’t implemented is the EU will pursue legal action against the UK for not fulfilling its legal obligations under the withdrawal treaty – that’s where this will go.”

“Ireland is not going to be targeted if the British government does not follow through on its legal commitments internationally – it will be the UK that will be targeted legally should that happen,” he said.

However, the Fine Gael deputy leader said he remained hopeful that agreement could be secured, stressing that it would nevertheless mean “fundamental” changes in the way businesses operate.

He described the Internal Market Bill as “controversial – and rightly so”.

“This is effectively the British government saying ‘give us what we want in terms of the implementation of the protocol or we’re going to legislate anyway to do what we see fit’,” he said

“The problem with that is they’re essentially saying they’re going to break international law if they think it’s appropriate.”

He said a deal between the UK and EU would reduce the need for the British government’s to implement the controversial elements of the legislation.

“It may be a lot easier politically to simply not reintroduce some of those elements of Part 5 of the bill that could potentially break diplomatic law because the issue will have been resolved at negotiation,” Mr Coveney said.

Simon Coveney, Minister of Foreign Affairs in Ireland, says No Check points in the border in 1st January

Your ticket for the: Brexit: Simon Coveney says no border checks on January 1…even if no UK-EU deal

Brexit: Simon Coveney says no border checks on January 1…even if no UK-EU deal