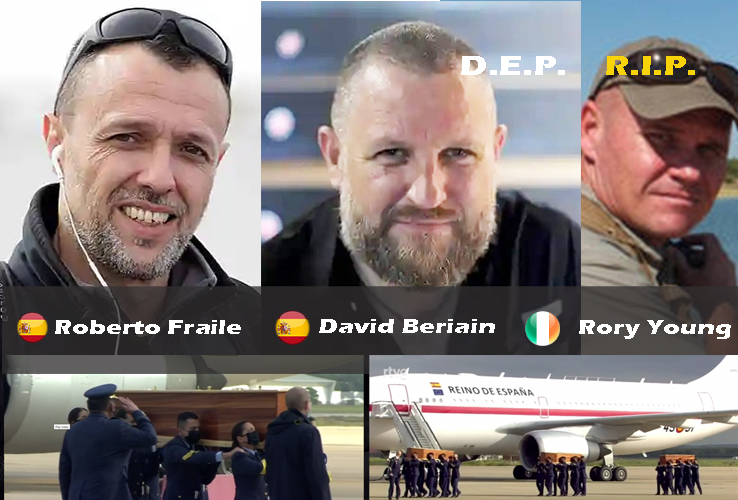 Two Spaniards and an Irishman, all three died with their boots on. And I believe, that recognizing the tremendous tear that makes something so important to some be torn from you, such as being your father, your partner, your child, for the rest is the pain imagining the damage of those who feel it in first hand and in first skin. That is as human as putting yourself in the place of the others. I think the only “positive” thing to look for is precisely that when that dramatic moment has arrived, they did it with their boots on.

They do what was their passion, their way of life, their adventure, their risk, their entrepreneurship. Right now the three of them were working on a Documentary anti-poaching, in which Rory Young managed a specific foundation on it in which they trained vigilantes for the defense of fauna, and on which he had just written a book.

They were two Spaniards and an Irishman. It had to be that way. Some live in the way they have and in what surrounds them, and others seek, a few, seek to change the situation of those who have it worse or have nothing because they rip it off. They were three profound humanists, that’s why they approach human dramas and try to understand them. The three of them lived a difficult life to teach it to those of us who watched dramas from home.

About David Beriáin and Roberto Fraile, their colleagues from Reporters Without Borders say that “they were the elite of their profession”. In other words, the elite of the elite.

Rory Young was less known, even for the Irish government it was very cautious to confirm whether he was really Irish or had dual citizenship. It is good to be cautious and walk with caution at such times. But he was an Irish spirit after all. Grandson of Irish and with an Irish Passport despite being born African, in Zambia.

The three, each in their field, were three pioneers, three of those leading the way. Three entrepreneurs that never stop  looking for new projects, anxious to move forward. They were three professionals who know the big companies and then set up their own, pay themselves for their trips and try to convey to us the situations that others have.It had to be in Burkina Faso. “City without law”. If the entire area of ​​the semi-arid Sahel, that can be considered an area as dangerous as the most. According to the United Nations it has about 3 million displaced people and refugees.Burkina Faso, the country that was formerly Upper Volta, and which took its name from an idea as beautiful as its translation “the Homeland of men of integrity”. Now beaten by insurgents, criminals, poachers, and jihadists, it is no longer a place to appreciate so much nature and so much humanity with integrity.

The country where two years ago, in May 2019, the Spanish Salesian Missionary, Fernando Hernandez, born in Ledesma (Salamanca), was  assassinated, and few months before, February 2019, the also Spanish Missionairy Antonio César Fernández from Pozoblanco (Córdoba)

DAVID BERIÁIN, born in Navarra. For 43 years, he had covered the war in Iraq, Afghanistan, Congo, Sudan and Libya as a reporter for the newspaper “La Voz de Galicia”. Highly respected by all his international colleagues, for so many projects, even though it was the documentary series “Clandestino” that he produced for DMAX that made him more popular. He also worked for CNN. He showed us organized crime, drug trafficking clans in El Salvador, Mexico, Venezuela, Albania, Italy, and Colombia. Arriving to enter the FARC camps.This is how David explain it in his documentary “Die to tell”: “What you live has a price (…) but it’s worth it for the conversations. When people give you the privilege of sitting down to tell you about their experience, it is for me something almost mystical, full of truth and sincerity. That justifies almost everything ”.

ROBERTO FRAILE, 47 years old, father of 2 children, born in Baracaldo (Bilbao) and who has lived in Salamanca for years and has a family in Valladolid. He worked in the Television of Castilla y León CyLTV, and it is said that on his vacations he used to pay out of his pocket for trips to places of war. Getting hit and wounded by a grenade in the Syrian War, when he was in Aleppo. He was able to be repatriated and his life saved thanks to the quick attention of his comrades. Thanks to allthis we can know what is happening in the world, no matter how much it seems that they get into the eye of the hurricane. If it weren’t for these men, the world would be closed to what happened to the most defenseless on earth. They would have no voice or image.“It was rare to see him fidgety or nervous. Fear never overtook the professional on the road. It was until exhaustion. He endured weeks and weeks on very tough missions without hinting at a complaint and encouraged his colleagues when morale faltered or things went wrong, ” says Luis de Vega in El País.

RORY YOUNG. Irish, married and father of two children, was born in Zambia, and that his respect for Ireland was not only in the passport but in the appreciation of his Irish parents. He was an inspiring leader, as regarded by his peers. Hardened for a hardened area and founder of the Chengeta Wildlife Foundation.All his life he has been devoted to the defense of nature and lately he has faced poachers creating anti-poaching patrols. Leave his life and also his teachings in a book on the subject. Yes, we have lost three great men. And they leave us a long way ahead, to see if we know how to take advantage of it.

The Apostolic Nuncio for Burkina Faso and Niger is Irish Archbishop Michael Crotty, who has sent his condolences: “It was very sad for me to hear that an Irish citizen and two Spanish journalists lost their lives while moving through the eastern region of Burkina Faso . May God give you eternal rest, and I wish to express my deepest condolences to your families, friends and colleagues. Their deaths are a tragic reminder of the violent reality that affects West Africa ”.

The Irish and Spanish Army maintain members of the blue helmets working for security in the neighboring country Mali, within the G5 group, which covers the 5 main Sahel countries (Mauritania, Mali, Burkina Faso, Niger and Chad).

For its part, the European Union has allocated 52 Million Euros to fund development and security projects in the G5 Sahel area.

“The minister wishes to express his sincere condolences to the family of Rory Young and the families of the two Spanish citizens who also lost their lives in this tragic incident,” said Simon Coveney, Irish Foreign Minister. As did the representatives of the Spanish Government, who joined the thousands of sincere expressions of condolence.

The Ministers of Defense and Foreign Affairs with the Ambassador of Ireland, Síle Maguire

Rory Young, the Irish conservationist born in Zambia, with his wife and kids

David Beriáin the journalist that approach us to the human dramas

Half mast flags in Artajona (Navarra) where David was born

See all the News in English
Return to the Home page Hispano-Irish.com

Your ticket for the: Arrive in Madrid the corps of the two Spanish Journalist and the Irish Conservationist killed in Burkina Faso (Hispano-Irish)