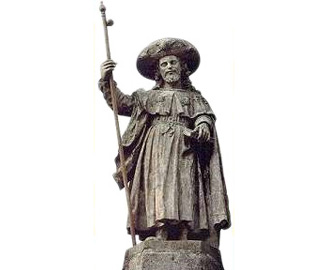 HISTORICAL BACKGROUND: THE WAY OF THE STARS

The tale of the burial of St. James remains is tinged with legend. Tradition has it that two of St. James apostles, Anthanasius and Theodore, collected his body and head, after his execution circa. 44 AD, and took them by boat from Jerusalem to Galicia. After seven days at sea they landed on the Galician coast at Iria Flavia, near the present day town of Padron. From there, the remains were brought and buried in a forgotten location in the Lupario or Francos hillfort, not far from Santiago.
The Tradition continues that around 820, a hermit called Pelayo, who lived in Solovio-where the current Church of Saint Fiz of Solovio is sited in modern day Compostela-in the forest of Libredon, saw, over several nights, radiance and mysterious illuminations which looked like a rain of stars over a knoll in the forest. It also happens that the bones of Saint James were conveniently discovered when Spain’s Christian armies of the re-conquest verily needed them.

When the army of the prophet Mohammed was leading the Moor’s, the discovery of these remains of St. James, Santiago, allowed the development of the myth of Santiago Matamoros, of St. James the Moor slayer, of the transformation of James from a fisher of men for his lord to the vision of a knight upon a steed of white, killing up to 60,000 Arabs single-handed in only one battle. Galicia exchanged hands several times and with the assistance of our valiant knight, Spain won the day and the legend lived on.
The light or star that revealed the existence of the apostle’s tomb became another of the symbols related to Santiago and the pilgrimage cult. But it is not just a star; the impression of the Road to Santiago has always been marked in the Milky Way as its direction also indicates that of the walker to Compostela, which is why this route became known as the Way of the Stars.

Your ticket for the: ABOUT THE PILGRIMAGE